Fyre Festival: Breaking Down The Marketing Strategy That Went Viral

By now, Fyre Festival is well known as the luxury music event that flopped spectacularly. Billy McFarland, the brains behind the ill-fated venture, pleaded guilty last summer to fraud and was sentenced to six years in prison.

But from a marketing-only perspective, we have to admit the Fyre Festival team did a lot of things well; there's value to their marketing approach. And we plan on unboxing just that.

Before the music festival of the decade, turned into a nightmare, McFarland and Fyre Media used well-honed marketing tactics - appealing to consumers’ hunger for sex, luxury and adventure - to build huge buzz and sell festival tickets. To be clear, this space does not at all condone what Fyre Media did beyond the marketing realm, but it makes sense to study the tactics used to promote the festival. By themselves, these marketing tactics helped build huge anticipation for the event. When applied correctly and backed up with proper infrastructure and a sound legal footing, these tactics can help your business boost your event or product profile.

So why did the Fyre Festival marketing strategy work so well? We’ve broken it down. 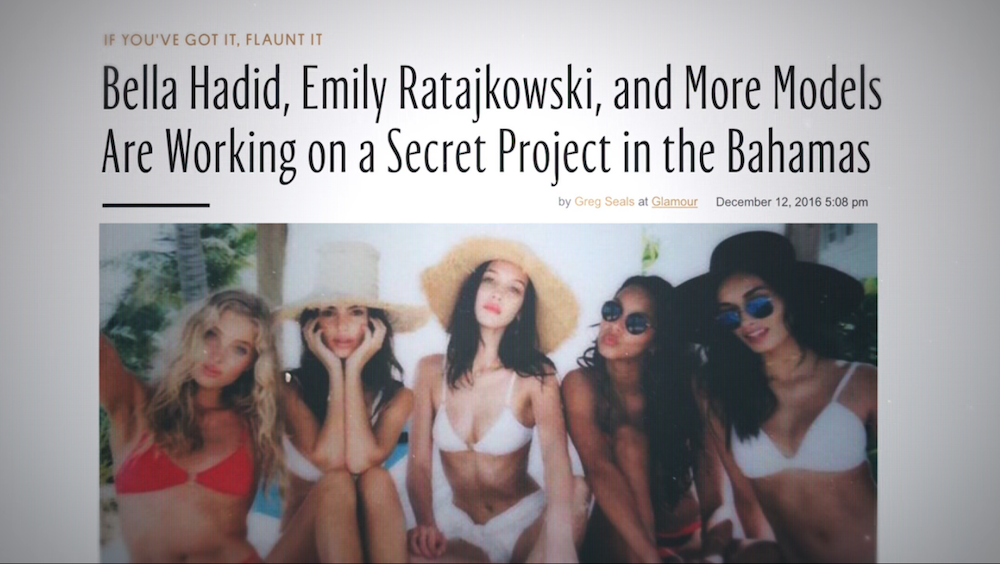 Social Influencers & The Power of Celebrity

Like most businesses these days, the people behind Fyre Festival went straight to social media to spread the word. Yes, they recruited social influencers, but Fyre Media also snagged celebrity influencers to tout their event and build serious buzz.

In late 2016, Fyre Media enlisted iconic models, including Kendall Jenner, Bella Hadid, Emily Ratajkowski and Hailey Bieber to promote Fyre Festival on social media. Those four models alone have more than 160 million followers combined on Instagram. If you are aiming to sell a few thousand tickets to mostly well-off millennials, this was one surefire way to do it. In purely marketing terms, the models’ recruitment was a stroke of genius.

Fyre Media used their celebrity and social influencers to help deliver prepackaged bits of content to whet the appetites of potential ticket buyers.

One of Fyre’s first steps in building buzz was getting their celebrity influencers to tease their followers by posting a mysterious orange logo on their Instagram pages. The posts mentioned Fyre Festival and hinted at an elite experience that was soon to happen, but little was explained in depth. Not only did this pique followers’ curiosity, it put Fyre Festival on the radar of countless people who otherwise might not have heard about it. 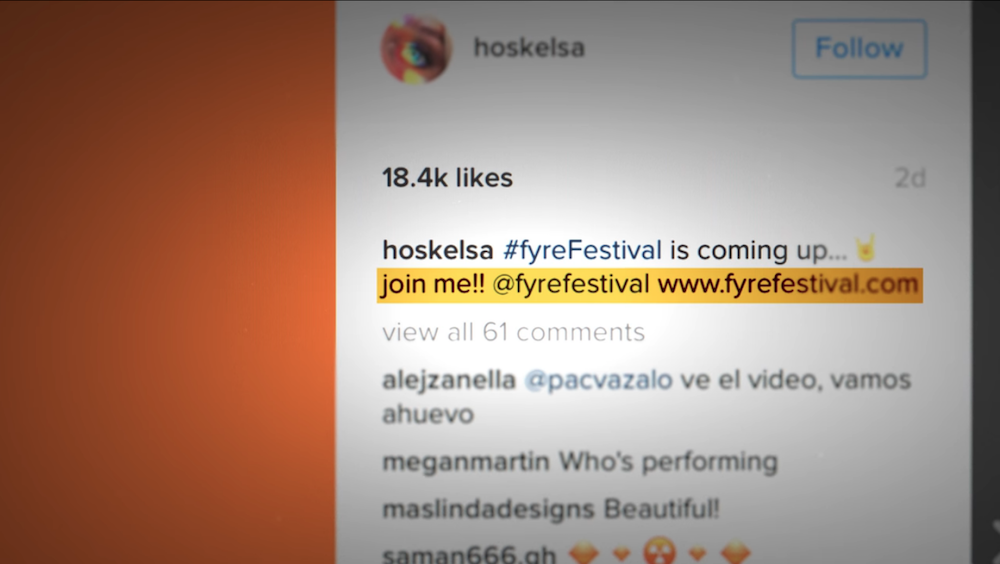 The orange logo was simply the first tease. Sex became the big carrot to draw ticket buyers in. Photos of some of the above-mentioned models were splashed across Fyre’s social media channels. A slick promotional video featured the bikini-clad ladies swimming in Norman’s Cay, a Bahamian island, and frolicking along the shore, without a care in the world.

Beyond the models, the promo videos and Fyre’s social media posts promised a magical reality of music, art, food and adventure held over two weekends. Attendees were wooed with video and images of what were sure to be two weekends of “can’t miss” concerts. Organizers eventually booked Majer Lazer, Blink-182 and Disclosure, amongst others. Celebrity chefs were to be featured, whipping up meals for festival attendees to enjoy on the beach.

Of course, accommodations were part of Fyre Festival’s allure. Attendees weren’t staying at the Holiday Inn across the street from the festival site, or camping out (at least that wasn’t the intention). They were promised luxury, eco-friendly domes set up on site. If they were willing to pay, guests were told they could stay in luxury villas.

Fyre Festival promised guests unique activities, including playing in the sea with wild pigs. Of course, playing with pigs might not be everyone’s idea of fun, but it certainly would qualify as a once-in-a-lifetime thing to do for many city-dwelling millennials. There was also talk about treasure hunts in the sand - for buried cash. If you’re targeting wealthy millennials, free money is certainly a draw.

Organizers also promoted the element of danger. In the promo video and on social media, organizers sold the event as taking place on an island once owned by Pablo Escobar, the notorious Colombian drug lord. From a marketing perspective, this was a sly move. In the last two decades, Escobar’s persona has become culturally entrenched. Netflix’s Narcos is a huge hit, and there have been numerous films based on Escobar’s violent, drug-fueled and opulent life. If anything, linking the festival to Escobar only enhanced its appeal to an Instagram-obsessed crowd always on the hunt for the next adventure. 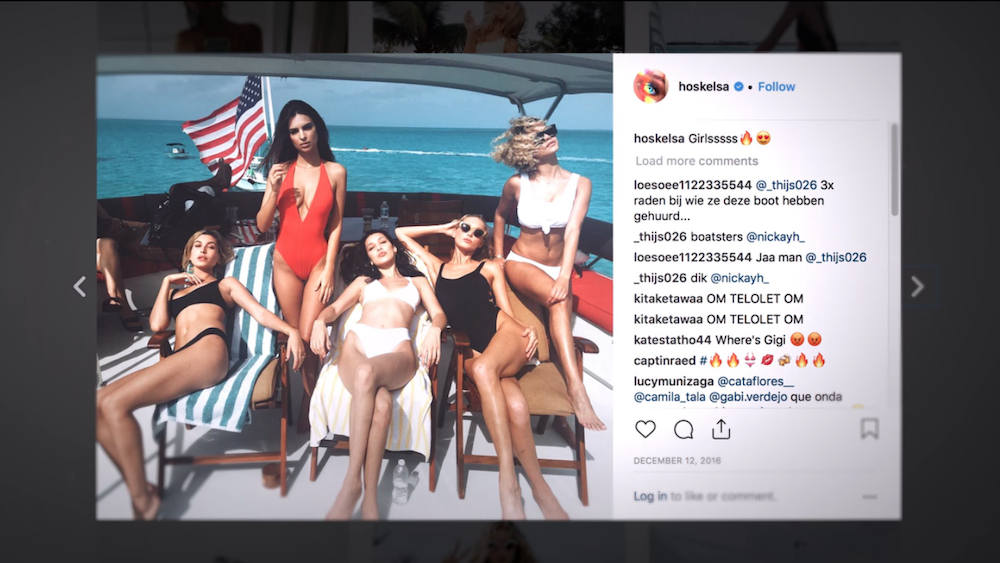 In the end, Fyre Festival tickets sold out quickly because the promoters were, in essence, selling to themselves.

Tickets were priced at between $500 and $1500 and VIP packages for up tp $12,000, but those tickets pitched wealthy millennials two weekends of sex, sun, music, beautiful beaches and accommodations as well as top-notch food by world-renowned chefs. That’s a lot to look forward to.

Fyre Festival’s promoters tapped into a uniquely millennial desire, as one person close to the event said, to have “Instagram come to life.” Of course, pitching a fantasy event is one thing, but actually making it work is another. Fyre Festival organizers failed to execute, no argument here. But their marketing approach, offering an exclusive event that appealed to millennials with cash to burn (no pun intended), was a runaway success.

Applying Fyre Festival’s Marketing - But Getting It Right

If you are a small business, you can certainly apply Fyre Festival’s marketing tactics (but nothing else) to your own work. For example, using social media influencers to help your campaign is a great place to start. Of course, you don’t need supermodels plugging your brand (and you probably don’t have the money to pay them, either). But seeking out influencers on a smaller scale within your industry is a great way to get eyes on your brand. Social Influencers who operate on a smaller plane tend to interact more with other users and tend to produce higher engagement rates.

Of course, when you are selling, don’t be afraid to cater to people’s baser instincts. There is nothing wrong with tastefully using sex, food and adventure in promoting your brand. After all, we are human, and we’re drawn to sex, food and adventure - we can’t help it. Of course, moderation is important, so gratuitously covering your marketing material with bikini-clad women may - depending on who you are targeting - turn more people away than not. A little skin, delicious food, or madcap adventures can go a long way in getting your brand the attention it deserves.

Finally, remember to tailor your message so you offer something unique. In Fyre Festival’s case, a luxurious music festival on a Bahamian island was certainly one of a kind. Unfortunately, it didn’t turn out to be true. Don’t be shy about demonstrating how your brand is different when you are going after customers. If you are introducing something not yet on the market, or something ahead of its time, take advantage of this. For example, if your product is a piece of technology that will revolutionize a millennial’s life, hit social media hard. Fyre Festival pitched their “cashless and cardless experience” as the way of the future. Who knows, one day it might be, but in Fyre’s case, the technology literally didn’t work.

In the end, Fyre Festival was a disaster. But on a marketing level, they successfully used tactics that any small business can apply to their own brands. We can all learn from failure, whether ours or someone else’s. Just make sure you don’t make the same mistakes.

got a project or
partnership in mind?

(905) 534-2484
We'd love to hear about your digital project. Please get in touch with one of our Project Consultants.
info@awkward-media.com