Website Traffic: How to Capitalize on World Cup Fever
Remember how the green Versace dress that Jennifer Lopez wore to the Grammy’s led to the creation of Google Images? That was a fun and historic "break the internet" moment, but it’s nothing compared to World Cup hysteria! The World Cup dominates the internet every four years,  instantly becomes a trending topic and the subject of thousands of memes, GIFs and hashtags. There's a unique opportunity for digital marketers to connect with hyper-engaged users. The question is, how does one draw attention from users with tunnel vision?

Content monitoring company, Talkwalker, offers real-time social media data for the World Cup: The word “football” alone has been mentioned over 77 million times in one year. This doesn’t even include Americans, who refer to the game as soccer. So, we know an opportunity exists.

It's tricky to capitalize on what the online world is obsessing over. You need to enter the conversation in a natural way and not seem like an interloper. Don’t worry if you aren’t a raving mad football fan, just be sure to do your research. Understand how the tournament works, what countries are involved, the important players and a little bit of history for context. To share the passion, you need to spark a bit of your own. Once you have a knowledge base, start creating tactics that can drive World Cup fans to your website. Therefore, make sure that your content is honest, authentic and relevant.

Try doing more than posting a message with World Cup-related hashtags—this never works. What you want to avoid is co-opting an event for obvious marketing purposes. In 2016, Skittles delivered a masterclass in how to engage online audiences by staying on the sidelines. When Donald Trump Jr. used a metaphor involving Skittles to convey what he perceived to be the danger of Syrian Refugees, Skittles humanely responded with a simple tweet centred on the idea that, “Skittles are candy. Refugees are people.” They never mentioned the situation again but that didn’t stop hordes of people from publicly applauding their tactic. 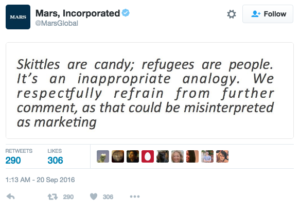 Use your Best Judgement

Use your best judgment as to when to weigh in on a conversation. Something like the World Cup is going to have its controversial moments (just ask Robbie Williams) so you shouldn’t feel pressured to blindly jump in. Instead, craft a strategy to seamlessly blend into the moment.

It’s a bit late in the game to get organically found for anything to do with the World Cup. Instead, consider buying ad space on websites that experience an uptick in traffic during this time. You could use pay-per-click ads to connect users to your relevant landing pages, offers, and promotions. In addition, content marketing might be the most proven method to attract World Cup fans to your website. You can even reach out to football experts and enthusiasts to participate as guest bloggers. Most of all, be sure that your website can convert traffic into leads or sales.

Sure, Awkward Media can't help you catch World Cup fever or win your pool (we had Egypt), but we can help build and design functional, beautiful and responsive websites while making sure that the right people find it and as a result, find your brand. Get in touch if you need an extra hand.
got a project or
partnership in mind?