Branding Hearts: A History of Valentines Day Marketing
Whether we’re single, happily married or something in between, we all know Valentines Day is on the way. It could be that love is in the air, but more than likely it’s because it happens to be the next major holiday after Christmas and stores replace candy canes and gingerbread houses with heart-shaped everything. As the date of romance approaches and you search for the perfect gift for your partner, or pretend you're happy alone, we’re bringing you a history of Valentine’s Day marketing.

A Brief History of Valentines Day

In 3rd century Rome, Emperor Claudius II decided unattached men made better soldiers than those with wives and children and so outlawed marriage for young men within the empire. Legend has it that a priest named Valentine continued to perform marriages for lovers in secret. When Claudius discovered Valentine’s defiance, he ordered the priest be put to death. Two centuries later, Pope Gelasius declared February 14th as a day for honouring Saint Valentine. It was not, however, a day associated with love until the Middle Ages, where in France and England the date was believed to be the beginning of birds’ mating season, thus beginning the connection between the Saint’s day and romance (or copulation). Written Valentine’s letters and cards began to appear more commonly in the 15th century, and by the 17th century it was commonplace to present a loved one with a card, called a “Valentine”. It didn’t take long for this to catch on in the United States of America, and by the mid 1800s Valentine’s cards were being produced for the masses. Thus entered the opportunity for marketers. [caption id="attachment_644" align="alignnone" width="221"] 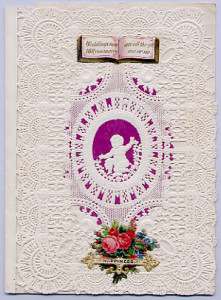 One of the first Valentine cards from the 1800s. (Wikicommon)[/caption]

Today, it’s estimatedover 1 billion cards are sent worldwide for Valentine’s Day, just behind Christmas. To say there’s an interest in the day may be understating things a bit. In the 20th century, cards were supplemented with all the gifts we’ve come to associate V-day with: bowed boxes of chocolate, ornate rose bouquets, and diamond-studded jewelry. In Canada, we seem to enjoy purchasing alcohol and tech toys too. That’s become the standard now and brands are required to find novel ways to sell to customers through Valentine’s Day. The Internet has opened an era of e-cards, love coupons, and online gifts. There’s an opportunity to pull on the heartstrings with campaigns everyone can relate to, like the UK supermarket, Tesco’s Basket Dating ad: https://www.youtube.com/watch?v=-TV5e_9Pfe4 Of course, it doesn’t stop there. What (and who) can be marketed, will. When a human partner is missing, there’s always the potential of a pet to benefit from Cupid’s arrow, and their owner’s wallet.
got a project or
partnership in mind?

230 - 43 Hanna Ave,
Toronto ON M6K1X1, Canada
We'd love to hear about your digital project. Please get in touch with one of our Project Consultants.
info@awkward-media.com