Bowie the Brand: Lessons from Music's Most Popular Outsider

It's a new year and with it brings a new hope, new perspective, and new beginnings. Unfortunately this year, it's also brought on a slew of deaths of influential artists, including the great David Bowie. Even if you didn't identify with his music, you knew the name and what he represented in popular culture. David Bowie was not only an ever evolving musician, but his work inspired other artists, genres and stories. It's impossible not to notice someone who puts such careful consideration into EVERY aspect of their music, persona and performance, and not for a moment lazed into a public identity that simply "worked". A brand, as described by Pierce Csurgo, "is an identity, the ‘essence’ of an organization or individual. People on the outside see a brand as what is being offered, or promised to them." Bowie promised acceptance, exploration and inventiveness. With these values established, Bowie was never fixed to presenting himself as one thing, he was able to reinvent himself time and time again, with characters that fit his life and his message. If Bowie felt a persona was tiring, he discarded it and created another, each with a different lesson to the world of how to promote what you truly believe in. Here's how he pathed the way for all creative types. Start with nothing but honesty [caption id="" align="aligncenter" width="333"]

Is it too soon to make a comment on those sideburns?[/caption] David, the early years. A singer/songwriter who advocated for long hair, and sang about accepting each other's differences and space travel. Similarly to a budding brand, young Bowie promotes honesty and the ability to imagine the kind of world you want to live in and contribute to. Despite the obvious changes in the outward appearance, this initial branding demonstrated the values that Bowie would maintain throughout, artistry and acceptance. The Power of Concept (Ziggy Stardust)  [caption id="" align="aligncenter" width="306"]

werk.[/caption] Derived from Andy Worhol's concept of the Rock and Roll persona being separate from the artist, this was Bowie's initial reinvention or "rebranding". Rather than simply releasing new content, hoping that his initial quirky persona would draw enough attention, Bowie opted for an entirely new and highly developed personality. Though Ziggy only lasted for an album, it was so well developed that still to this day, it is one of his most famed and discussed. His outfits, personality and makeup were all of a unified nature relating to the story, something to consider when developing your brand's content. The Power of Design (Aladdin Sane) A lad insane, similar in appearance to Ziggy Stardust, he lacked the same colourful story. What he does teach us is how far design can go. Often mistaken for Ziggy Stardust, if you've seen this facial makeup... [caption id="" align="aligncenter" width="500"]

(Of course you have)[/caption] ...then you know Aladdin Sane. The makeup that you see scattered amongst the attendees of a Liberal Arts party. The iconic lightning bolt in bold cherry red and baby blue once again represents but a small percentage of his entire career, but is most often used to visually demonstrate the rock and roll hero. Departure from the familiar (Thin White Duke) [caption id="" align="aligncenter" width="444"] Luckily the hollowed cheeks just adds to the character...[/caption] Commonly referred to as the cocaine years for Bowie, it also marks his complete departure from the Ziggy and Aladdin; a complete scrapping of ideas and a rearrangement. Though Bowie described this individual as "a nasty character indeed"[6] , his image and motions were sleek and cool. His music changed from glam to a funk inspired continuation of previous work. Bowie shows us that simplicity can be beautiful, and change is necessary (ch-ch-ch...). Branching out Into New Mediums (Bowie's in Films) He was always looking for new avenues to exercise creativity, adding to the overarching concept of who or what he was as an artist. His appearance in Nicolas Roeg's The Man Who Fell to Earth was the first of many for Bowie, as well as playing Jareth, the Goblin Bulge, err King. [caption id="" align="aligncenter" width="293"]

Though it really doesn't need to be highlighted.[/caption] It gave his audience a new way to engage with him, transferring his theatrical sensibilities from the stage to the screen. It's a reminder to maintain intrigue by trying new avenues to promote your brand's message, associated lifestyle, and involvement. He also developed an internet service provider bowie.net, now davidbowie.com, and in 1997 had one of the first downloadable songs on what he foresaw as the future. Never be limited to one medium to engage with the world. Collaborations  [caption id="" align="aligncenter" width="460"] 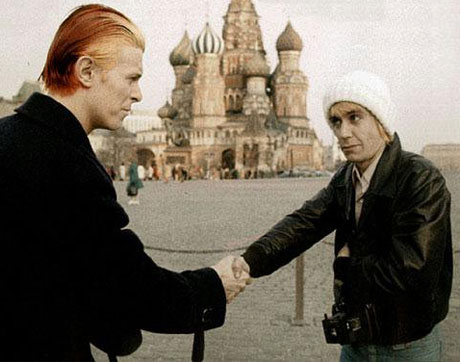 An unnaturally normal event for the both of them.[/caption] Known for his collaborations, Bowie has always been an advocate for the work of his peers. He has his well known duets with the late and also great Freddy Mercury, Bing Crosby and Mick Jagger. He's worked with friends such as Iggy Pop, Lou Reed and more. He's worked with the former Beatles legend John Lennon to create "Fame", and Brian Eno for his "Berlin Trilogy". In more recent years, he'd worked with Canadian darlings Arcade Fire, initially joining them onstage in 2005 and helping them launch their band into an international spotlight. Rather than treating these artists as competitors, he promoted their work as well as his own, striving for accomplishment rather than personal triumph. How to immortalize a message As it is now well known, David Bowie created the last of his work while fighting Liver Cancer. I know firsthand it is a physically straining and, more often than not, fruitless battle. He allowed this struggle to feed into his work, forever acting as an advocate for creation, despite the circumstances. He explored what dying was like, using his hospital bed as the stage for his last work. [embed]https://www.youtube.com/watch?v=y-JqH1M4Ya8[/embed] Even in tragedy, he found a way to share this with his audience. A strong brand or individual can see the growth and opportunity in any situation, constantly moving forward. He stood up for what he believed, not what would sell. His strength and courage determined what was cool rather than following it. Though we've lost the physical being attached to it, we've been left with the incredible story of a complete legend, who will live on in the stars. [caption id="" align="aligncenter" width="620"] 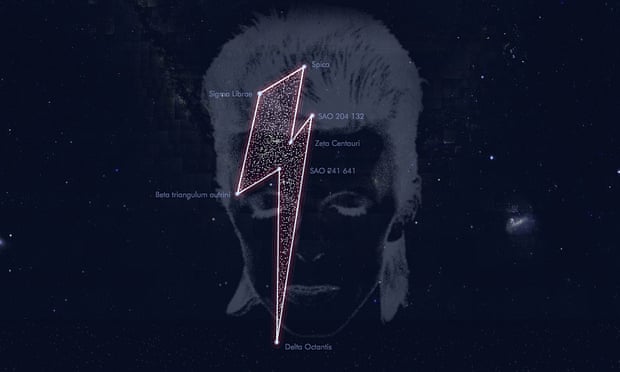 Photo: stardustforbowie.be[/caption]
got a project or
partnership in mind?